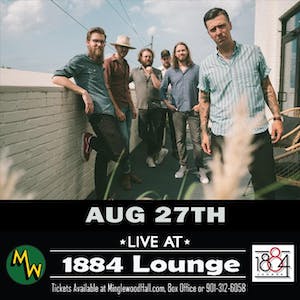 American Aquarium has been touring extensively in support of their latest release Things Change, a powerful narrative chronicling the last two years as seen through the eyes of front man BJ Barham. Stacked with his signature storytelling, which is deeply personal and instantly relatable, the album is an introspective reflection of personal growth and change, which also touches on the current social climate in our country. Produced by Grammy nominated singer/songwriter John Fulbright, the band's seventh studio album is their finest collection of southern rock-n-roll to date and the group's first release on a label after building a loyal fan base and selling thousands of records on their own. American Aquarium recently made their television debut on Last Call with Carson Daly and their music has received praise from press including NPR Music, Billboard, Associated Press, American Songwriter and Rolling Stone who says, "'Things Change' is an unabashed rock & roll record – a snapshot of a band and its reinvigorated leader."