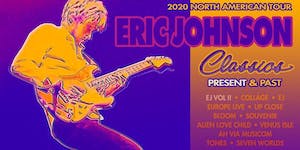 iCal
Google
Eric Johnson’s stature as one of the premier guitar players in contemporary music is his artistic trump card, backed by a Grammy Award.

Eric Johnson’s stature as one of the premier guitar players in contemporary music is his artistic trump card, backed by a Grammy Award and five nominations, platinum album, Top 10 hits like “Cliffs Of Dover,” praise from critics and the esteem of his peers. But the full hand of his talents marks him as well as a gifted songwriter, dynamic live performer, singer, pianist, song interpreter, and creator of a rich and diverse musical legacy.

His myriad and distinctive musical gifts are vividly evident on Johnson’s aptly titled new album, Up Close, released on his own Vortexan Music label via EMI Distribution. The new 15-track disc finds the noted master craftsman cutting loose, roaming through variations on the rock, blues, pop, country and jazz all found at the core of his sound, pushing the dynamic range of his artistry, and mixing it up with such friends and peers as guitarists Jimmie Vaughan and Sonny Landreth and guest singers Steve Miller, Jonny Lang and Malford Milligan.

“I decided to let go a bit and allow things to happen and just go with the flow,” explains Johnson of his approach to the album. “I think that’s a direction that works better for any artist, and especially for me. I like my work to have a high proficiency, but I also wanted to go for the energy and magic of the performances.”

That vitality and vivid musicality brims from such hook-filled numbers as the hard-rocking instrumentals “Fat Daddy” and “Vortexan” and the driving vocal song “Brilliant Room” (sung by Milligan). “Gem” is splashed with bright and painterly six-string colors, “Soul Surprise” finds Johnson weaving a picturesque tapestry of both his guitar and piano gifts, and “Arithmetic” summons up a swirling and spectral kaleidoscope of guitars, keyboards and Johnson’s singing. His early years and influences are explored on the Mike Bloomfield/Buddy Miles-composed blues song “Texas” (from the 1968 Electric Flag album A Long Time Comin’) on which Miller sings and Johnson’s and Vaughan’s guitars engage in stirring interplay, and “Austin” (sung by Lang), which looks back to his teens in his hometown as a budding player and avid music fan who would be allowed to slip underaged into music nightclubs and “go sit in the back and listen to bands.” “On The Way” is a delightful Texas meets Tennessee twang romp, and “A Change Has Come To Me” opens with a six-string nod to Jimi Hendrix (a prime Johnson influence) that carries through the track as it burgeons into a celebration of the pleasures of the deep and soulful groove. Interstitial instrumental snippets like the spellbinding Indian music-flavored opener “Awaken” and the dreamlike “Traverse” and “The Sea And The Mountain” plus “Change (Revisited)” weave the collection together. And Johnson caps the CD with the uplifting grace note of “Your Book” on which he and Landreth interweave their playing (including Johnson’s stately piano work) with emotive elegance.

The lyrical themes of reflection, emotional revelations, personal growth and fulfillment are underscored on the album by Johnson’s most daring, urgent, progressive and at times raw and fervent guitar work to date. With its sonic immediacy (thanks to a mix by engineering legend Andy Johns) and openhearted musicality and songwriting, Up Close truly lives up to its name as Johnson continues to forge fresh and compelling new dimensions of his artistry.

Johnson leapt to the forefront of contemporary music some 20 years ago as “an extraordinary guitar player accessible to ordinary music fans,” as the Memphis Commercial Appeal hails him, with his landmark million selling 1990 album Ah Via Musicom. Lauded as a “recording [that] has reached near-classic proportions within the guitar community” by All Music Guide, it was preceded by dedicated groundwork as a live performer that marked him as a talent bound for great things. And it’s been followed by a diverse and fascinating musical journey that inspired The New Age Music Guide to rave that “Eric Johnson plays guitar the way Michelangelo painted ceilings: with a colorful vibrancy that’s more real than life.”

His many achievements include being enshrined in Guitar Player’s Gallery of Greats and named one of the 100 Greatest Guitarists of the 20th Century by Musician magazine alongside numerous other awards. He also enjoys the admiration of many of his fellow players and has performed and/or recorded with such notables as Chet Atkins, Steve Vai, Joe Satriani and others, and follows the release of Up Close with an acoustic Guitar Masters tour sharing the stage with six-string masters Peppino D’Agostino and Andy McKee. He was tapped by Eric Clapton to appear at the 2004 Crossroads Guitar Festival and plays his second stint of the Experience Hendrix tour in fall 2010. He has paid homage in song to such players as Jerry Reed (“Tribute to Jerry Reed” on his album Bloom), fellow Texan Stevie Ray Vaughan (the Grammy-nominated track “SRV”) and Wes Montgomery (who Johnson saluted in his Ah Via Musicom song “East Wes”), and boasts both a signature Fender Stratocaster electric and Martin MC-40 acoustic guitar. “Cliffs of Dover” is featured in the video game Guitar Hero III: Legends of Rock as the final winning challenge. And in addition to his recordings, tours and DVDs under his own name, Johnson also plays with his side project Alien Love Child, which released an in concert album in 2000, Live and Beyond, that earned an instrumental Grammy nomination for the song “Rain.”

Even before his breakthrough with Ah Via Musicom, Johnson made his indelible musical mark with his 1986 first album release Tones. It landed him on the cover of Guitar Player magazine, which hailed the album as “a majestic debut,” and earned him his first Grammy nomination for Best Rock Instrumental Performance with the track “Zap.” Ah Via Musicom won Johnson a Grammy for “Cliffs Of Dover,” which was one of his record three Top 10 instrumental hits from a single album alongside “Trademark” and “Righteous.” Following three years of concerted touring that established him as a continuing popular concert attraction, Johnson recorded Venus Isle, which on its release in 1996 garnered him another Grammy nomination. In 1998, his previously unreleased first album recording from 1976, Seven Worlds, was finally issued. A limited-release collection of demos, outtakes and live tracks, Souvenir, hit the streets in 2002. His most recent studio album, 2005’s Bloom, yielded a fifth Grammy nomination.

Johnson’s success over the last 20 years was presaged by a grassroots rise in which he made his bones and burgeoning reputation as a formidable musical talent and player since he first became a local sensation in the Austin clubs as a teen with the psychedelic rock band Mariani. Trained on classical piano as a youth, he switched to the guitar after the stateside arrival of the Beatles in 1964. As a young player he delved deeply into blues, jazz, country and other styles that inform his music. By the mid-1970s, Johnson began touring and sparking a buzz about his astonishing talents in the jazz-rock outfit Electromagnets, whose recordings and a live TV performance from that era were released in the 1990s to critical acclaim. He cut his teeth in the studio on sessions for Cat Stevens, Christopher Cross and Carole King, and by 1984 his stature in Texas and beyond was so strong that the unsigned artist was tapped to make his first appearance on the prestigious PBS concert show “Austin City Limits.” At the urging of such stars as Cross and Prince, Johnson was signed to a major label deal with Reprise Records and emerged onto the international recording scene.

His dynamism as a live performer is captured on the 2008 DVD Anaheim as well as the 2005 DVD/CD release of his second “Austin City Limits” show in 1994, Live From Austin, Texas. His 1996 G3 tour with fellow guitarists Joe Satriani and Steve Vai yielded a best selling album and platinum DVD, G3: Live in Concert.

Johnson’s eminence as a musical artist goes well beyond just his stunning guitar mastery. His keen compositional sense and lyrical playing create instrumentals that speak to listeners and convey thoughts, emotions and imagery, and Up Close also spotlights his singing and sure way with words. “It really boils down to the music and the song at the end of the day,” he explains. “If it doesn’t have that it gets boring for me.”

On his new release, “I wanted to bare myself a little further and show myself more,” says Johnson. “As you evolve as a person and artist, you reach forks in the road where you look at what it is you really want in life and to bring out in yourself and thereby affect other people. What’s most important to me is to grow as a person, and because of that, I want my music to also grow and have more of a profound meaning and impact.” And Up Close finds Eric Johnson continuing to expand his artistry with compelling and enriching results.