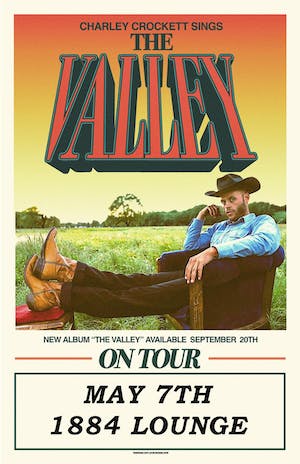 iCal
Google
Charley Crockett, a true descendant of Davy Crockett, was born in a poor town in deep South Texas

"What distinguishes him from roots music revivalists is the fact that he isn’t just unfurling traditional tunes...He’s also forging his own piercing ballads and solitary highway hymns, which are informed by his own experiences of leaving home, returning to his roots, and being humbled by the simultaneous terror and thrill of not knowing what lies ahead." - Texas Monthly

“One of Crockett’s most memorable and life-changing records.” - The Boot

"Immersed in the honky-tonk honesty of Hank Williams and the blues styles he discovered as a street performer in Dallas and New Orleans." - Wide Open Country

"If you’re wondering who is carrying Hank Williams torch on down that lonesome highway, wonder no more – the answer is Charley Crockett." - Americana Highways

“One of my favorite Americana/roots musicians." - Ann Powers, NPR Music