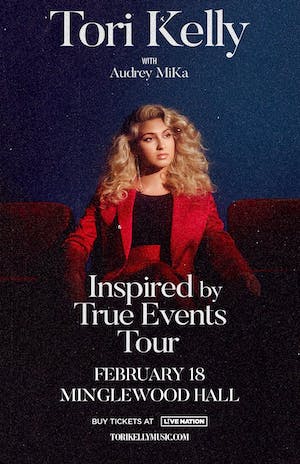 my new album “Inspired by True Events” out now 🥀📽https://torikelly.lnk.to/TK3

Since making her debut with 2015’s Unbreakable Smile—a widely acclaimed album that entered the Billboard 200 at No. 2—Tori Kelly has lit up the pop landscape with her breathtaking vocals and full-hearted songwriting. Over the past year, the L.A.-based artist continued to captivate with her sophomore effort Hiding Place: a passion project whose R&B-tinged take on classic gospel won Best Gospel Album at the 2019 Grammy Awards (with the chart-topping single “Never Alone” taking the Best Gospel Performance/Song prize). And though Hiding Place marks a stylistic departure from Kelly’s work in the pop world, each song shows the steadfast commitment to uncompromising artistry that carries through all her music.

To kick off 2019, Kelly is offering up a soulful new single called “Change Your Mind.” A pleading confession of an undeniable love, “Change Your Mind” finds Kelly’s voice shifting from tender to soaring to thrillingly gritty, each line delivered with pure, unbridled emotion. It’s exactly that blend of raw feeling and elegant vocal command that made Kelly a 2016 Grammy Award nominee for Best New Artist, and saw her recognized as a breakthrough artist at Billboard’s 2015 Women in Music ceremony.

Produced by 12-time Grammy Award-winning gospel artist Kirk Franklin, Hiding Place debuted at No. 1 on Billboard’s Top Gospel Albums chart, amassing more first-week streams than any other gospel album in history. With “Never Alone” shooting to No. 1 on Billboard’s Hot Gospel Songs chart in early January, Kelly is now following her fall 2018 Hiding Place tour with The Acoustic Sessions—a 26-date North American run featuring stripped-back renditions of treasured songs throughout her catalog. Along with reprising her role as Meena in the forthcoming sequel to the 2016 animated movie Sing, she’s also already at work on her next album.